Limiter vs Compressor: What’s the Difference?

Dynamics processors are some of the most formidable tools an engineer can employ. Mixing is all about balance, and leveling amplifiers, limiters, and compressors help even out the volume across instruments. We’ve heard all of these terms before, and even used compression and limiting in our own mixes, but what’s the actual difference between a limiter vs compressor? And what the heck is a leveling amplifier? The truth is, they’re all variations of the same thing! Let’s explore.

What does an audio compressor do?

The simplest definition of a compressor is that it reduces the dynamic range of a signal. This means that the loudest parts appear quieter, and the quietest parts appear louder. What’s the significance of this? Well, for one, it makes the signal more even. A really dynamic performance with lots of drastic changes in volume is going to be buried in certain parts, and is going to jump out in others. A compressor smooths all of that out for a more consistent overall level.

The main components of a compressor are threshold, ratio, and attack/release. Lots of them also have makeup gain to add back some of the volume that’s lost from gain reduction. The threshold and ratio work together to tell the compressor when to kick in, and by how much to reduce the signal respectively. Lower thresholds and higher rations result in heavier compression.

Finally, attack and release tell the compressor how fast/slow to clamp down on a signal after it surpasses the threshold (attack), and how fast/slow to let go of the signal (release). These two parameters are important because they change how the compression sounds. Faster attacks will squash transients and slower releases may result in audible pumping. There’s always a balance between the two that’s dependent on the program material.

Compressors are used on individual tracks, buses, the mix bus—anywhere. Beyond controlling volume, lots of plugin emulations like the 1176 or LA-2A add desirable color to any track to spice it up further. And as we alluded to earlier, the term leveling amplifier, or limiting amplifier, is printed on the LA-2A and 1176 respectively. Those are just synonyms for compression!

What does a limiter do? 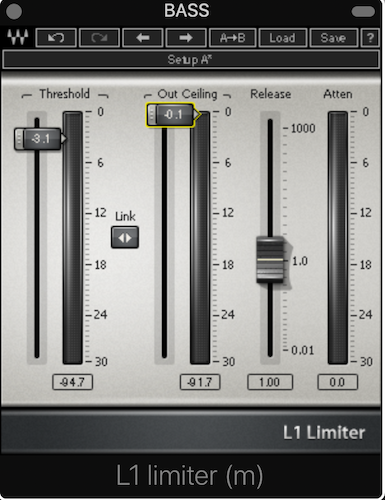 An audio limiter is similar to a compressor. The only real difference between them is the ratio. Limiters work at much higher ratios than compressors. Usually we call any sort of dynamic control happening at a ratio of 10:1 or higher limiting.

As its name might suggest, a limiter keeps the maximum volume from going past a set point. It provides protection from overages that might result in clipping, for instance. One way to use a limiter is to set the threshold close to the maximum level you want. From there, you’d use a high ratio, like 10:1, which means the signal has to go 10 dB above the threshold before the signal will output 1 dB above it. You can see how that would control the maximum level and keep it locked in place.

Most people will run a limiter on their mix bus to keep the signal consistent. It will also buy you some added volume for a loud, competitive mix. If you plan to send your mix to a mastering engineer, however, you would want to remove the limiter. Some people will also run a limiter on individual tracks that need some heavy-duty dynamic control, like a bass guitar. Limiting is not unheard of on buses, either, such as at the end of a vocal chain for a bit of extra control on subtler settings.

A limiter vs compressor is really just a different flavor of the same thing. Limiters turn down the signal way more heavily and are mostly employed to keep a mix or instrument at one solid level with no overages above a set output level. Compressors are generally less abrasive and more usable for a variety applications. It’s not uncommon to have compression across every track in a mix, even. Compressors work great for less heavy-handed, more creative dynamics processing.

A limiter will also generally have faster attack and release times than a compressor so it can respond to very sudden transient peaks with ease. That’s why they work so well across the mix bus, because they can keep a transient in place without drastically affecting the rest of the mix during that one brief peak.

Engineers use both compression and limiting all the time!