Which Vocal Compressor is Right for the Mix?

We’ve stressed the importance of mixing vocals time and time again! Because lyrics are what average listeners immediately identify with, making a singer sound great should almost always be a priority. Amongst other tools, the perfect vocal compressor for the job can really elevate the overall sound of your mix!

Firstly, you’ll want to decide what you’re trying to achieve with any given compressor. It helps to first be familiar with the basics of vocal compression. Once you are, the following are some very simple ways compression is used on vocals to help them sit right in the mix.

Use a Vocal Compressor for:

UREI/Universal Audio 1176: One of the most famous and widely used FET limiting amplifiers of all time. It’s tremendous on vocals, whether you’re using the real thing or one of many plugin emulations. The Waves CLA-76 version is particularly great, as is the UAD one. When it’s time to find a vocal compressor, reach for an 1176. It’s a very fast compressor, capable of taming the sharpest transients in the source material. The 1176 also has a desirable sonic character, making it a go-to for many of the best mixers in the world.

Try It For: Dynamic compression. The 1176’s speed will catch the biggest vocal peaks and tame them!

Teletronix LA-2A: For a cool tube-y sound, you can’t go wrong with an LA-2A. I keep both an 1176 and a 2A (plugins) on my vocal buss, with the latter applying just a bit of glue and tube character at the end of the chain. Its controls are simple: a Peak Reduction knob to control gain reduction and a Gain Control knob to add make-up gain. At the risk of sounding cliche, the LA-2A does add an analogue warmth to vocals that sounds incredible.

Try It For: Tonal compression. The 2A works beautifully as a bit of overall leveling and glue at the very end of a vocal chain.

Empirical Labs Distressor: Another fantastic compressor. It has many, but one particularly unique feature is the ability to add 2nd- or 3rd-order harmonics to the signal, emulating vintage tape saturation. It also has a wide range of ratio settings for more control. For example, at a ratio of 10:1 with the Attack control set to 10, the Distressor’s circuitry goes into an LA-2A emulation mode. It’s renowned as the Swiss Army knife of compressors and for good reason. Use it as a vocal compressor, on drums, bass, guitar, or anything else, really.

Try It For: Parallel compression. The Distressor can do it all, but it’s unique ability to add a bit of extra saturation to the signal make it a great choice for smashing a performance for parallel processing.

dbx 160A: Again, one of the most-used compressors ever. It may not look like much, sporting just threshold, ratio, and output controls, but it’s highly regarded and has been used on everything. The 160 series was initially introduced in 1976, undergoing various iterations. The 160A is still produced today as world-class compressor.

Try It For: Aggressive vocals/dynamic compression. The 160A is praised as a great rock, metal, and rap vocal compressor.

Waves RVox (Plugin): A dynamics processor designed specifically for vocals. Its simple and streamlined controls make it an excellent vocal compressor, gate/expander, or limiter. For quick and easy results, give the RVox a go.

Try It For: Dynamic compression. The RVox is an all-in-one dynamic processor.

FabFilter Pro-C 2 (Plugin): Analogue hardware and plugin emulations aside, FabFilter consistently provides a character all its own. Offering eight different compression styles, including one for vocals, the Pro-C 2 is the epitome of a modern software compressor. 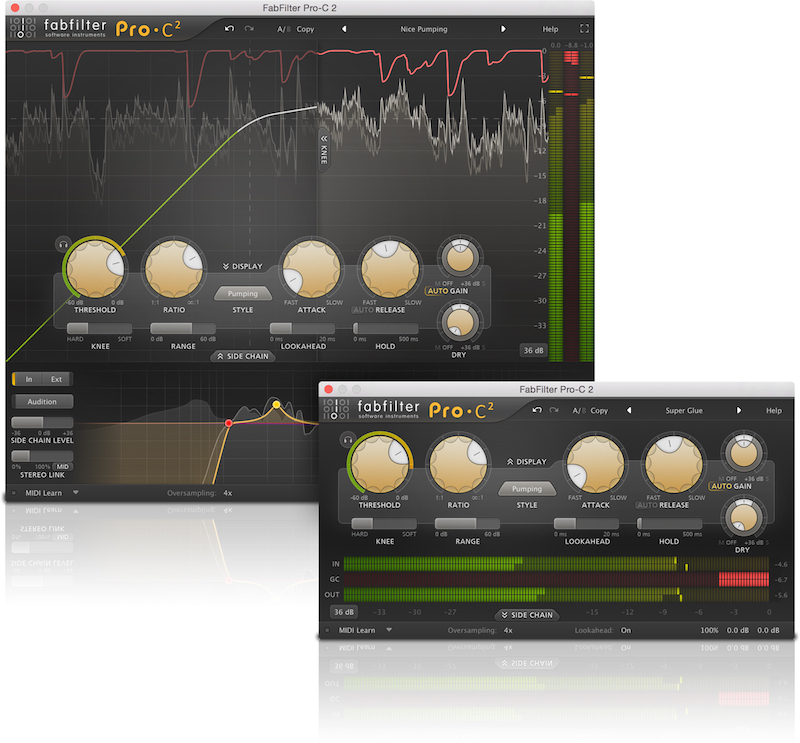 Try It For: Anything! The Pro-C has a “Vocal” mode which works well for a bit of both dynamic and tonal compression, bringing vocals to the front. It also has an “Opto” mode (think LA-2A) which would be great for tonal compression, or “Punch” for an extra bit of grit and oomph.