Making music on the go has never been easier! We’ve already covered some of the best DAWs for iOS and Android, and now it’s time to take a look at best synthesizer apps to go along with them. Mobile synthesis has come a long way, so you can easily create new synth patches and jot down sketches anytime, anywhere. Many of these synthesizer apps are scaled down versions of full virtual instruments, so the quality is high. And better yet, they’re also extremely affordable!

What Is a Synthesizer?

A synthesizer is an instrument which creates sound by generating different signals, then manipulating those signals with filters and other effects. Robert Moog is largely considered the godfather of the modern synthesizer; he and his company released the first Moog synthesizer in 1964.

In 1970, Moog developed the Minimoog. It was the first synth ever sold in music stores. By the ’80s, synthesizers were all over the place. Yamaha’s DX7 was the first commercially successful digital synthesizer, and it’s still one of the top-selling synths ever. Today’s virtual instruments (software synths) bring many of the old sounds, and plenty of new ones, right to anyone’s mobile device or computer. 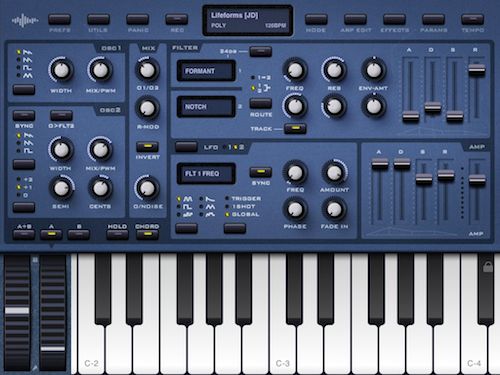 Sunrizer is a subtractive synthesizer by BeepStreet. It has two analogue-modeled oscillators capable of outputting standard waveforms (saw, PWM pulse, triangle, and SuperSaw). The SuperSaw recreates the Roland JP-8000 synthesizer, used by innumerable artists over the years. From BeepStreet:

“Sunrizer synth is a virtual analogue synthesizer that takes the definition of iOS synthesizer to the next level. Thanks to carefully designed architecture and heavy usage of co-processor, it blurs the boundaries between iOS and hardware synthesizers. Sunrizer was built to perform and works perfectly with any MIDI keyboard or sequencer. A lot of research has been done in order to achieve unheard warmth and clarity.” 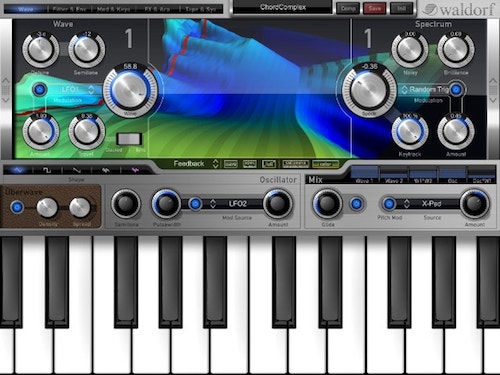 Waldorf Music’s Nave is a wavetable synth for iOS. For reference, popular wavetable synthesizers include Native Instruments’ Massive and xFer’s Serum. Check out the blurb from the manufacturer:

“The Nave sound engine includes two novel wavetable oscillators with sonic possibilities way beyond the scope of conventional wavetable synthesis. While the spectrum of a sound can be transposed independently of its pitch, the waves can be rendered from perfectly periodic to very noisy and anywhere in between. Especially sounds with an accent on formants can be produced easily, which made us integrate a speech synthesizer for the easy creation of wavetables, enabling Nave to talk and sing.

“Nave comes complete with over 500 presets from highly acclaimed sound designers like Richard Devine, Sacha Dikiciyan (of Sonic Mayhem fame), Laurence Rapaccioli (Arksun), David Boldini (7 Skies), and Fletcher Kaufman (Sunsine Audio), amongst many others. All seriously showcase the depth and diversity of this impressive and inspirational iOS synthesizer — so much so, in fact, that Richard Devine was suitably moved to create no fewer than 95 presets alone, all of which are included in Nave.” 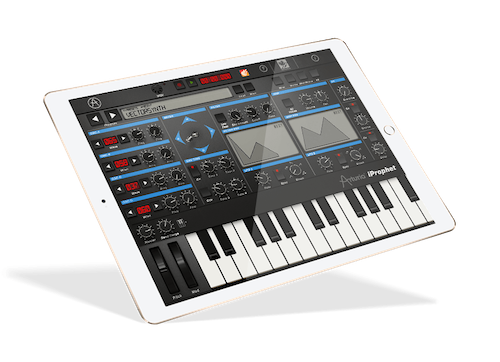 Arturia’s iProphet is a faithful mobile reproduction of the Prophet VS synthesizer from the ’80s. Recreating this sound isn’t easy to do, but for just $9.99, Arturia has done a remarkable job creating one of the niftiest synthesizer apps available. This one has all of the sounds from the original hardware synth, as well as over 500 presets created by today’s musicians. 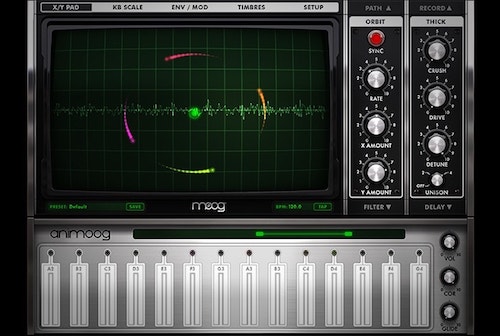 No list of synthesizer apps would be complete without something from Moog themselves. The analogue legends have tapped into the mobile synthesis market with their Animoog app, slated as the “first professional synthesizer for iPad.” Designed specifically to take advantage of touchscreen technology, the Animoog is intuitive to use whether you’re experienced with synthesis or just delving in for the first time. The app was also nominated for a TEC Award. From Moog:

“Animoog, powered by Moog’s new Anisotropic Synth Engine (ASE), is the first professional polyphonic synthesizer designed for the iPad. ASE allows you to dynamically move through an X/Y space of unique timbres to create a constantly evolving and expressive soundscape.

“Animoog captures the vast sonic vocabulary of Moog synthesizers and applies it to the modern touch surface paradigm, enabling you to quickly sculpt incredibly fluid and dynamic sounds that live, breathe, and evolve as you play them.” 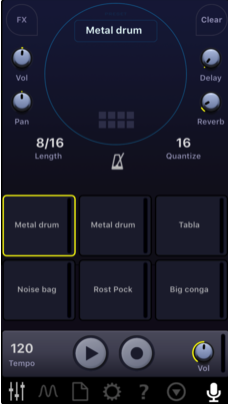 Named the “most powerful and genuinely useful percussion app on the App Store right now” by Computer Music, BeepStreet’s Impaktor is a must for on-the-go beat-making. It’s also a steal at just $4.99, giving anyone access to quality drum sounds. The synthesizer features 90 presets and variety of tones ranging from acoustic drums to industrial ones, and the onboard recorder gives users 6 tracks to lay grooves down.

The Impaktor is available for both iPhone and iPad.

While most apps are pretty affordable, there’s only one thing better than that. Here are a few of the best synthesizer apps, completely free! 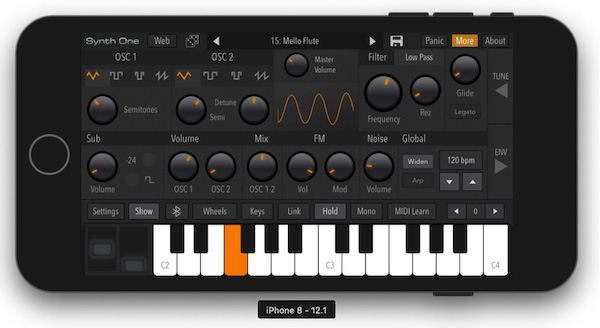 Synth One is wildly popular; in fact, it’s the largest free/open-source music production app for iOS mobile. This is a hybrid analog/FM polyphonic synthesizer that comes packed with over 300 presets from some of the industry’s leading talent. You can absolutely get professional sound out of this free app for your iPhone; it’s actually pretty amazing.

The free version of SynthMaster One is an iPhone-only wavetable software synth. This beast contains 16-voice polyphony and well over 600 presets. A universal version of the app can be purchased for $19.99, which makes SynthMaster One available on iPad. Otherwise, just stick with the iPhone version for free. 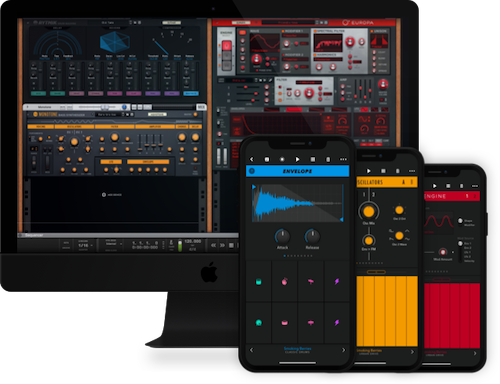 Reason Compact is the mobile version of Reason Studio. Compact is an excellent tool for on-the-go electronic music production, from making drum beats to writing melodies and basslines with built-in virtual instruments.